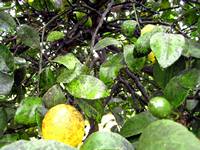 Unfortunately citrus, like many plants, do get attacked by some pests and diseases. Below are the most common problems and their solutions. 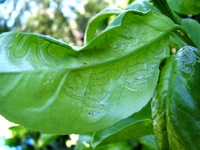 This nasty pest, mines through the leaves on the fresh young growth, leaving distorted curly leaves. It is a small nocturnal moth that lays its eggs on the underside of the new leaves, these hatch into tiny little grubs that mine through the leaf leaving a little silver trail. They then curl the edge of the leaf over and form a chamber to pupate. They hatch into a little moth and the cycle begins again. Leafminer will not kill the tree and does not affect the fruit; it only distorts the new growth. When establishing a young tree it is critical to prevent leafminer. On and old established tree, leafminer is not a major problem. In Sydney, leafminer is only around from Christmas to the end of April. Spraying with ‘Eco-oil’ or ‘Pestoil’ every 3 weeks during this period will prevent a leafminer outbreak. It is important to cover all the foliage including the underside of the leaves. Once damage is done, you can only prune this new growth off and spray to prevent more damage. 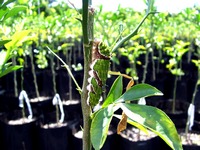 There are a few different caterpillars that attack citrus, chewing large irregular holes in the leaves. They can vary in colour, from black to green with colourful stripes or spots and have small fleshy spines on their bodies. Length can vary from 15mm to 50mm long depending on their larval stage. Can be controlled by hand removal or spraying with a suitable insecticide, such as, ‘Maverick’. Although it should be noted that these caterpillars turn into lovely large citrus butterflies and a few chewed leaves are not going to kill the tree. 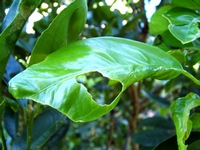 The common garden snail can cause extensive damage to the leaves and fruit of citrus, especially oranges. They start by attacking young leaves by chewing holes in them leaving a skeletonised effect. As fruit ripens they can also attack the skin, chewing right through to the flesh. Control them by using regular snail baits following the instructions on the pack, and be careful of your animals. 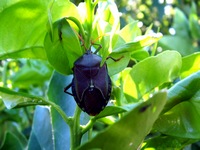 One of the most common pests known to the home citrus gardener is often referred to as ‘Stink Bugs’. They start out small and green developing to orange and finally to a bronze shield shaped bug up to 25mm long. When disturbed they spray out a foul smelling liquid that can irritate peoples eyes and skin. They generally only attack the young shoots of a tree causing them to wilt. But in large infestations they can also attack flower and fruit stalks causing a reduction in fruit numbers. If numbers are small, hand removal (make sure you wear gloves and safety glasses) and squashing is an easy solution. We have even heard of gardeners using their old vacuum cleaners, very successfully. If numbers get to out of hand then sprays, such as ‘Eco Oil’ or ‘Pest Oil’, are a good first alternative to stronger insecticides, such as ‘Confidor’

There are a number of different scales that affect citrus trees and include both soft and hard types. They attack most parts of a tree, from the stems and trunk (White Louse Scale), to the fruit (Red Scale). Soft scales produce large amounts of honeydew, which ants love, and this can lead to Sooty Mould forming. Hard scales do not produce honeydew but can blemish fruit or cause leaf drop. High populations can cause the death of trees. Less toxic sprays such as ‘Eco Oil’ and ‘Pest Oil’ can help to stop this problem, repeated sprays will be necessary.

Sooty mould as a result of previous scale and aphid infestations. 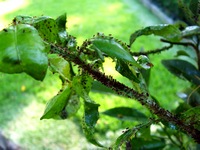 Aphids affect many types of plants including citrus. These small sap sucking insects, usually green or black normally attack the fresh new growth, distorting the leaves and excreting honeydew, which then causes the secondary problem of sooty mould and ants. They attack in plague like proportions, with literally thousands gathering on the ends of new shoots. The safest chemicals would be “Pest Oil’, ‘Eco Oil’, pyrethrum based sprays or ‘Yates Natrasoap’.

Latest From The Blog

Rose Care
How Citrus Are Grown
Fertilising and Pruning